As part of the University of Washington, the Theberge Group is a lab that studies the chemical mechanisms underlying male infertility, prostate cancer, kidney disease, infectious disease, and more. They are at the forefront of the development of analytical chemistry tools that advance medicine, including biomimetic microfluidic systems for integrated cell culture and small molecule isolation.

What They’re Doing with DATRON

To support their research, the lab creates a variety of microfluidics devices. These devices are about the size of a credit card, and within that footprint there are multiple wells or channels that hold fluids and culture cells. The materials used for the devices are typically plastic: often polystyrene and cyclic olefin copolymer (COP).

The lab has the option to 3D print some devices, but prefers to mill devices using the DATRON neo, because the neo allows them to work with standard plastics, like polystyrene, that are well-vetted within the cell culture community. Since a lot of their devices are used downstream for culturing cells, using a device material that’s well understood is preferred. Most of the 3D resins don’t have the history of standard plastics.

The team at the lab, mostly composed of students, see the neo as a more precise machine than their previous CNC mill. There are also two key features of the DATRON neo they really appreciate. The first is the ability to mill with smaller tools at high RPM, which allows them to create small, precise features. Second, their neo is equipped with a powerful vacuum table that holds large sheets of plastic uniformly. Previously, they had to mechanically clamp the sheets, which led to material warping, leading to highly inconsistent results.

“We’re just able to make things that we never could make before. The DATRON neo enables us to do really cool science and ask new questions with the devices we mill.”

The team chose the neo because they wanted a machine that was precise, but also usable by students. They didn’t want to hire a full-time machinist to run the machine, and the neo had a great combination of precision and accuracy of a high-end mill, but was unintimidating for a student or user that had only been trained for a few days.

After using the Neo for some time, the team also discovered a few other benefits. These include:

If you’ve found value in this ebook and prefer a printed document, we’ve included a nicely formatted and printable PDF for you to download. 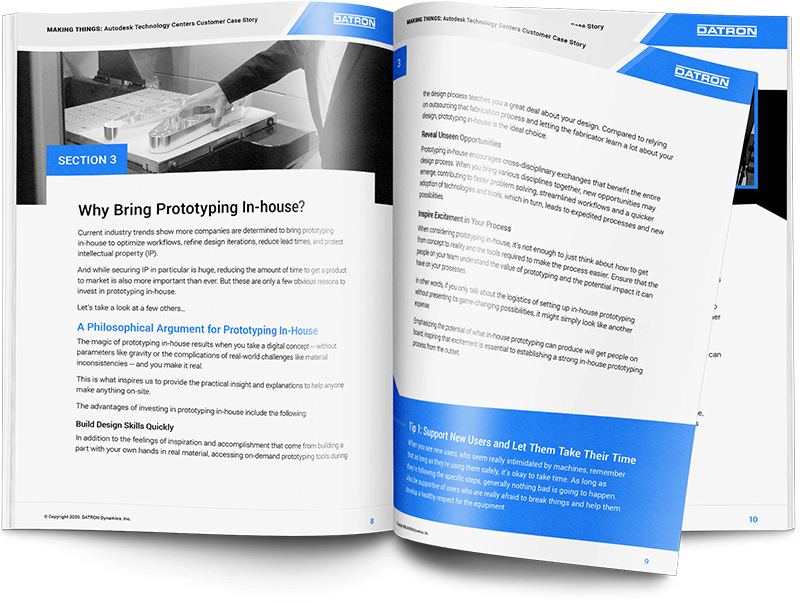