QC Precision needed a machine for the 3-axis and metal machining projects they had been passing up, so they could expand their capabilities, while matching the efficiency and agility they had already achieved with the back office technology — and that would integrate with what they had. In the 1960’s and ‘70’s Bill Devine, did tours of duty both in Vietnam and working at Excellon selling equipment to printed circuit board (PCB) manufacturers. In 1978, he set out on his own and founded QC Drilling, Inc. (now called QC Precision Machining) in Allston, MA to provide subcontracted drilling and routing services to the now burgeoning PCB industry.

Given his background, Devine naturally started off with a single Excellon machine — and from the very beginning, he was inclined to incorporate the newest technology immediately as it was released by his former employer. As a result, QC Drilling was virtually the first manufacturer in the World to use the Excellon’s Concept IV machine and CNC VII controller. In an industry where speed and efficiency could make or break you, Devine saw new technology as his competitive advantage.

As operations became streamlined out on the shop floor, Devine was streamlining his business model back in the office. He noticed that the margins on plastics part jobs that came in occasionally were 5 times greater than the margins on the PCB jobs that they were running day in day out. Amid an increasingly competitive PCB market, QC Drilling would transfer their focus to small, flat plastic parts required by many of the same customers for whom they had run PCBs.

By the 1990’s the success of this migration to plastics part manufacturing had resulted in a need for a new facility and QC Drilling moved to Salem, NH where they built a 10,000 sq. foot building. In the late ‘90’s Bill’s son, Shawn Devine, took charge of the business with a similar forward-thinking view of technology as their competitive advantage. Soon, operators were armed with bar code scanners for tracking jobs as they moved through the production process and management wielded hand-held PDA’s to watch the progress from their office or even on the road. With this real-time view of production and an inventory management system, QC Drilling delivers on their promise of speed and service.

“I can call a customer in New York, have them send a drawing to my phone one minute and send them a quote back a few minutes later based on both inventory and workload. This agility wins us business and in many cases, we produce their parts that same day.” – Jeff Murray, Sales Manager

Shawn Devine, QC Drilling President, viewed the implementation of this tracking and management technology as the best way to address another shift in their corporate focus – from high volume jobs to low volume high mix projects. “Look, if a manufacturer can wait five weeks for a part, they’ll send it to a low-labor-cost facility in Asia or Mexico. But, if time is critical, the job has to be kept regional … so everything we do has to work toward a common goal of speed and efficiency.”

In accordance with that methodology, Shawn Devine soon found himself seeking equipment for the plant floor that could match the efficiency and agility he’d achieved with the back office technology — and that would integrate with it. In the Fall of 2005, QC Drilling purchased a Datron high-speed machining center to address the 3-axis jobs and metal machining projects that they had been “no-bidding” due to lack of capability. Now, small part R&D and low volume manufacturing could be performed on a single machine. Designed exclusively for small tooling, Datron machines mill, drill, and engrave. 3D probing capabilities yield accuracy and quality control while automatic tool management, a 60,000 RPM spindle and a spray-mist coolant system collectively deliver both speed and unsurpassed surface finishes.

Plus, DATRON’s control software allowed QC Drilling to quickly integrate this new machine. “Unlike older machines that require a separate computer in order to enter our job tracking, the Datron has a standard PC with USB ports where the bar-code scanner can be plugged in … which brought it online immediately on day one.” – Mark Bailey, General Manager.

Soon, the DATRON machine was booked with work, running two shifts a day attended and one shift unattended. Typical jobs range from metal to a variety of plastics, but all are relatively small volumes of small parts. Many of these parts are milled from sheets of flat material and QC Drilling has employed Datron’s VacuMate™ technology as their preferred method of workholding.

The VacuMate from DATRON is designed to swiftly and efficiently secure flat workpieces to the bed of a machining system. Thin stock, which could be secured only with great difficulties before, is now secured literally within seconds – including plastic foils as thin as 0.001”, or aluminum sheets as thick as 0.250”. This vacuum table features airflow-optimized ports, with recessed chambers, to provide superior vacuum distribution. A low cost, gas-permeable substrate serves as a sacrificial vacuum diffuser, allowing the cutter to machine through the workpiece, without cutting into the table.

Because the DATRON machines are made specifically for high-speed micro machining, the spindle produces less force which means that a vacuum can be used to hold fixturing and blanks — something not possible with a conventional CNC. Centering inserts on the bottom of each segment register with conical cavities (milled by the machine itself) on the surface of the machining table. This results in a “boss-in-cavity” system that insures location repeatability. This boss-in-cavity” system combined with the large 40” x 27” work envelop on the DATRON machine allows for multiple setups for frequent projects or job types and provides agility to adjust to incoming jobs. So, if QC Drilling is in the middle of a batch and an unexpected rush project comes in, they just remove one fixture and replace it with the new job. When the rush job is complete, they return the first fixture to its place and pick up where they left off.

Shawn Devine says, “The ability to quickly adapt to changing needs is the essence of agility … and agility is the very thing that gives QC Drilling the competitive edge.”

The importance of QC Drilling as a case study is that rather than longing for the days of large production runs, they have embraced small runs as a viable and profitable business model – and have adopted new technology to fit the role. “We don’t get paid for doing quotes, so we have a system to quickly and accurately bid on jobs, bring them in house and get them done. We’re structured for that … and we do well with them.” says, Devine.

In fact, QC Drilling is so far beyond the large run mentality that they don’t even blink when the parts that they perfect are then brought to Asia for mass production. These changes allow them to move on to the next project lined up behind their machines … and there appears to be no end in sight.

“It plays into our business model. The DATRONequipment is booked even though we haven’t scratched the surface in terms of what it can do. It’s robust technology and the possibilities are limitless … and that means the profit potential is too.” – Shawn Devine, QC Drilling President

Located in Salem, NH, QC Precision is a cutting-edge machine shop that specializes in custom plastic manufacturing and is known for moving products from costing to prototype to end-product delivery in one swift, seamless process.

QC Precision needed a machine for the 3-axis and metal machining projects they had been passing up. 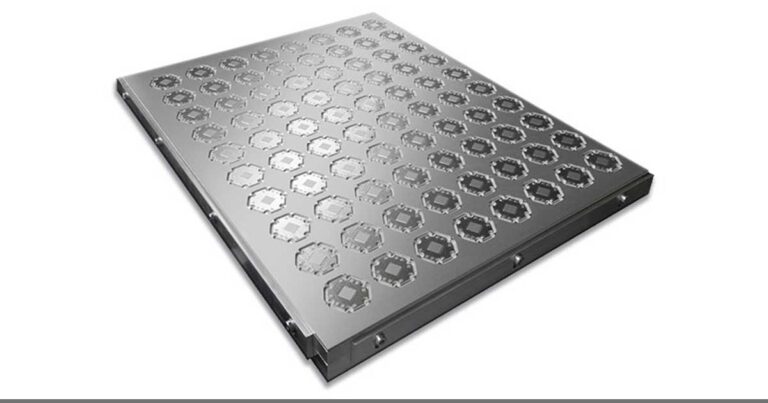