Haydon Kerk is an internal part of AMETEK’s Advanced Motion Solutions group focused on producing a full range of components and precision motion control systems. This includes linear actuators, lead screws and nuts, linear rails and guides, drives, motors and other components. The Kerk Products Division in Milford, NH was founded by brothers, Ken and Keith Erickson, in the 1970’s based on their patented improved anti-backlash lead screw design.

Today, their products are used primarily in the industrial automation, medical, aerospace & defense, petrochemical, and semiconductor industries. Plant Manager, Stan Brown says, “Whether it’s lead screws going into high-tolerance precision automation systems or screws that go into parts for orthoscopic surgery (replacing heart valves), one thing we can almost count on is that there will be some level of customization required.” Jim Lamson, Manufacturing Engineering Manager, agrees saying, “We joke that nobody ever orders anything out of our catalog, it’s more like a book of suggestions.”

To that end, just for screws alone, Haydon Kerk manufactures and stocks over 475 different combinations of diameter and advance per revolution thread types to use in their standard products and custom solutions. So logically, their business requires a lot of equipment to keep up with all of the variations requested by their customer base. Within several buildings on their campus, they house Swiss-type Machines, Doosan Turret Lathes, Thread Rolling Machines, Haas VMCs, OmniTurn CNC Lathes, Sinker EDMs, and Mori Seiki VMCs.

In 2011, it was their line of slide assemblies that lead them to search for another piece of equipment — specifically for milling rails from anodized aluminum extrusion stock. As with their other products, these parts also required a significant amount of customization to satisfy a range of customer requirements. Lamson says, “It may be a variation on number of mounting holes, size of mounting holes, whether they’re tapped or through holes, or the length of the rails, but there’s a level of customization on every order.”

At the time, Haydon Kerk was using various milling machines to produce these rails and Lamson says that there were problems. “The process was just too slow. We had multiple shifts with multiple operators per shift trying to keep up and they were buried and falling behind. We needed another solution and I began to research other milling machines that could handle these long aluminum extrusions.”

Ultimately, Lamson’s search didn’t take him very far because he found DATRON Dynamics, the North American distributor of DATRON high-speed milling machines, right down the street in Milford, NH. So he packed up a test rail, some extrusions, a completed rail, and some drawings and headed over to DATRON’s Technology Center to have them do a test cut. Lamson recalls, “An average rail of that size, was taking us over 15 minutes to make and there were multiple different setups to do it. DATRON accomplished the same rail, completed, in a fraction of the time with a single setup.”

The machine used for the test cut was the DATRON M85 which features a large 30″ x 40″ work envelope but has a comparatively small footprint. Haydon Kerk, Manufacturing Supervisor, Scott Ladue, says that this combination was eye-opening “If you look at our screw rail milling where we’re using a big VMC, the machine is as big as a sea crate out there – but that’s because we need the 60 inches of travel. With the DATRON we can still make a 60-inch rail, but its footprint is only 69” x 55”.

So, Haydon Kerk purchased the DATRON M85 for milling these rails and relegated the conventional milling machines to other work. Six years later, Ladue reflects on the impact of that decision in terms of time and manpower, “We were running multiple shifts at capacity and now we’re running the DATRON on one shift and we’re able to keep up with demand. Plus, the volume has increased since we got the DATRON in 2011, so we’ve basically increased our productivity by over 300%.”

In terms of setup, Haydon Kerk integrated four Kurt double-lock vises on the M85 so they can put two rails in at a time, or if they’re running short rails, they load two rows of individual rails. Ladue says, “So, regardless of rail size it’s just a matter of loading the vise and running the program for that series of rails after using DATRON’s integrated probe for part location.”

DATRON’s integrated probe is mounted on the Z axis and the measurement is performed when the probe swivels from its home position to the measuring position. DATRON’s patented capacitive measuring principle ensures high repeatability as well as measurement accuracy. The probe is easily operated through menu-controlled software. After the measurement is performed, offsetting occurs directly in the control software, automatically adjusting the milling program to compensate for surface or positioning variance. This minimizes operator error and virtually eliminates waste.

Lamson says that the integrated probing is particularly useful when machining rails that are longer than 30 inches. “Often a customer’s requirement may be for a much longer rail and with the DATRON’s onboard measuring system we can fixture the part, machine a portion of the rail, move it, pick up a feature that we’ve put into the part and position to the end very accurately.”

Lamson also says that DATRON’s minimum quantity (evaporating) coolant was an added bonus that had an unexpected benefit. “When the parts come out of the machine, we don’t have to put them through a secondary cleaning process in order to go into our TFE coating process. The chips that end up in the chip bin are clean dry chips, they’re not gummy or oily. If parts are still wet when they come out of the machine, you can literally watch them dry in front of you. Plus, the coolant is actually a little bit of a solvent so the parts probably come out of the machine cleaner than when they went in. That was a completely new and inspired idea for us that we could have coolant that we didn’t have to clean up.”

In addition to the DATRON machine, Haydon Kerk has also become a DATRON tool customer and Manufacturing Supervisor, Scott Ladue, says, “DATRON tools are excellent. We don’t buy a lot because they last a long time and the operator pushes them as fast as the machine will go. Plus, the parts that we’re machining have a hard coat anodize on them so they’re a little harder than raw aluminum.” Jim Lamson adds, “Using the DATRON led us to use our other machines a little differently, because you don’t tap anything on the DATRON, you threadmill, and we’re used to using taps. We’ve had parts being made on other machines where you couldn’t use a tap, so we went to DATRON’s tooling people and had them develop a custom threadmill for our other machines.”

During the six years of using the DATRON machine, Haydon Kerk has kept up with suggested preventative maintenance and as a result, their most stressful “service issue” involved running out of coolant. Plant Manager, Stan Brown recalls, “In terms of maintenance and reliability it’s been very reliable and very consistent. The only issue that I can recall is running out of coolant once, and in that case, DATRON provided outstanding service and support by providing additional coolant to keep production running.” 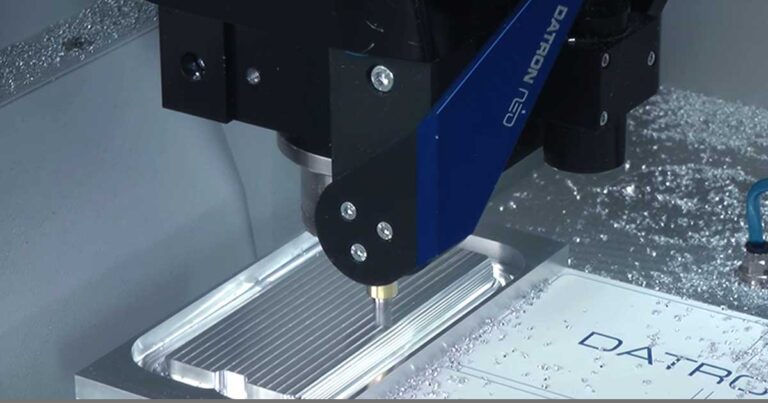